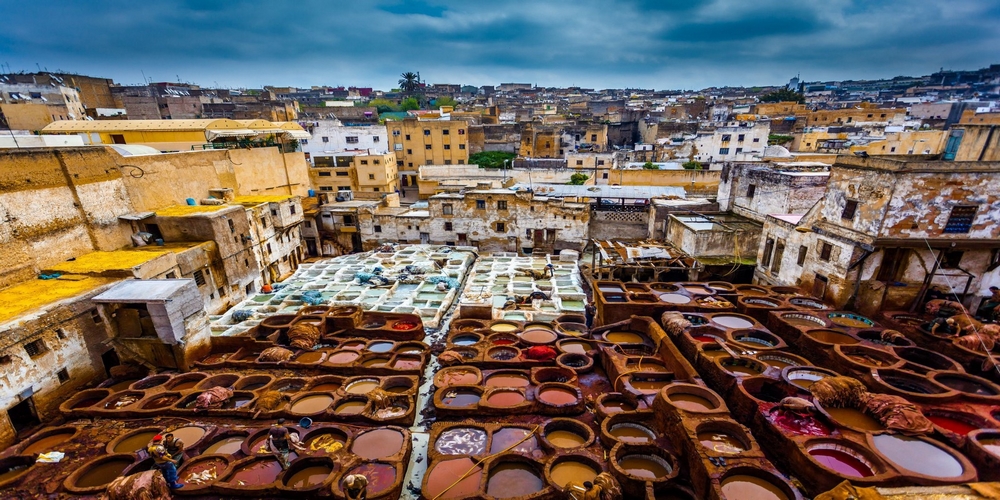 Just to let you know–I have recently fallen in love with a hot, dirty, beautiful mistress who goes by the name of Morocco. Stepping off of the Explorer, the first thing that comes to mind is: Where the hell am I? The port of Casablanca is heavily industrialized and extremely busy. Massive cranes fill the skyline while a thick dust swirls constantly through the air. The port is so large that we have to take shuttles to reach the entrance to the city. Once there, I was thrust into a hectic mayhem of cars and mopeds zipping every-which-way. Traffic laws are more of a suggestion in Morocco. Stoplights and lanes are there for what appears to be only shown. I’m still not sure which side of the road one is supposed to drive on. The sound of honking is almost deafening as it echoes off of the numerous skyscrapers that line the streets of the city.

We were all very excited to discover this new place. Our pre-port warned us about the conservative customs that are expected in an Islamic country. Women were to wear long pants and cover their shoulders at all times while men were told to avoid shorts and sleeveless shirts. None of it seemed concrete until I saw hundreds of women walking around with nothing but their eyes showing. Everything about this place seemed foreign. For the first hour, it was overwhelming. I found it hard to breathe–something that I am now sure was purely psychological.

Our first destination was to be the Medina. This is the old section of the city which houses a maze of alleyways lined with shops and shanties that stretches for miles. Upon arrival, we were inundated with shopkeepers trying to sell us rugs, scarves, clothes, sunglasses, watches, CDs, and hash. We wandered around for hours, bargaining and buying. We were lost but did not care. I was having too much fun to care. Suddenly a little girl no more than 6 years old ran up to me and started to kiss my hands and arms. She was putting her hand up to her mouth and muttering in broken English: “hungry money.” By this time I had spent quite a lot, but I found it impossible not to place a few coins in her hand. As she scampered off I realized that even if I had given her all of the money in my pocket it would not have made a difference. There are millions of children like her just in Casa alone. Bearing witness to such poverty and realizing that there was nothing that I could personally do about it was a profound experience. It hit me like a ton of bricks. For the first time on this Voyage, I felt truly lost. When everything you think you know about yourself and your place in this world changes instantly–well, it leaves your head spinning.

But enough about my feelings. The next day I traveled to Marrakesh. There I found an even larger medina filled with spices, food carts, snake charmers, and orange juice stands. If you are looking for the best orange juice in the world, this is where to find it. Speaking of snake charmers, I almost died twice in the beautiful city of Marrakesh. Once was crossing the street. I’ll skip the details but let’s just say a Mercedes slammed on its brakes, I dove out of the way, and I’m still alive. My second brush with death occurred while I was attempting to take a picture of my friend Sarah. She had a snake around her shoulders and I leaned in to snap the pic. What I did not realize is that I was leaning over a carpet that was home to a large black king cobra. The thing saw me, raised itself up, and reared back–ready to strike. The man who owned the snakes had to physically move me out of the way and sit me down a safe distance from the cobra. I took me a few hours to realize how close I was to have a really bad time. Other than that, Marrakesh was a place that I recommend everyone see at least once in their lifetime.

The rest of my time was spent traveling by bus through the High Atlas mountains and into the northern Sahara desert. There I watched the most incredible sunset I have ever seen from atop a dune before settling into camp with a tribe of “nomads”. I put that in quotations because I’m not entirely convinced that they were actual nomads. The whole thing felt touristy and cheap–but hey, we had a good time and the beer was cold (something that is hard to come by in Morocco–alcohol that is). That night I slept under the stars and awoke at sunrise to ride camels before enduring the eleven-hour bus ride back to Marrakesh.

Needless to say, my time in Morocco was both incredible and life-changing. Viewing America through the eyes of Islam has both its challenges and rewards. Some children would walk past and snort–their way of calling us American pigs. Some of my friends were threatened to be stabbed and one young lady even took a loogy to the face from an old Moroccan dude. But for the most part, the people of Morocco were nothing but nice. Their hospitality was unlike anything I have ever experienced–and the food: ridiculously good. The best way to put it is that they are not in favour of the US’s foreign policy, but they love the American people.

Morocco was, in a word, different. Everyone screams at you in Arabic, the only places to drink are expensive hotel bars, nobody can break change for 200 Durhams, and the Call to Prayer will come blazing into your hotel window at 4 in the morning (after the first few times it’s more comforting than annoying). I loved everything about the country and will definitely be returning sometime in my life. While Spain was like a vacation, Morocco was more of an experience. Sure, there are fancy hotels where you can spend all day laying by the pool sipping on pina coladas, but doing so would be a crime against yourself. I hope one day you all have the opportunity to lose yourselves in a Moroccan medina.

I’m currently making the left turn towards Ghana–following along the coast of the African continent. My only plan is to leave the country with a traditional African drum. Other than that, I’ll go where the wind takes me. I absolutely promise to track down an internet cafe and upload my pictures and videos. You have no idea how many times I’ve tried only to have the upload fail after an hour of waiting. I’ll let you know how things go and I swear to avoid any life-or-death situations this time. Until then, keep it classy America.