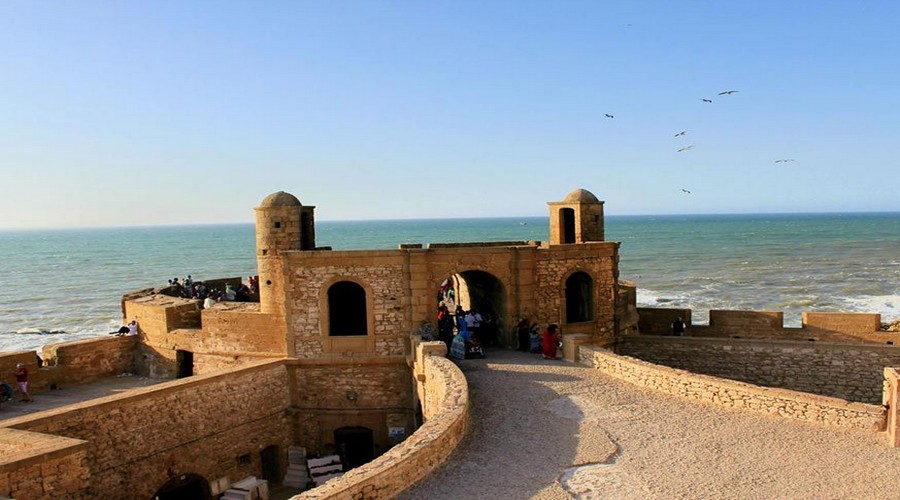 Originally called Amegdoul, meaning “the well-built” or “fortified place” in Berber, and then Mogador by the Portuguese and Spaniards, this beautiful fishing town on the Atlantic Coast was finally renamed Essaouira in the 18th century. The city is full of charm and has a fascinating history and architecture that are worth discovering during a day trip from Marrakech, located just over 100 miles east of Essaouira.

The “merchants of the king”, from the ten most prestigious Jewish families in Morocco, knew about the city across Europe. These families enjoyed the prestige that they obtained from the missions for the Sultan, who was entrusted with Western powers. They actually held much of the trade and economy of the port, the latter providing 40% of all trade on the Atlantic coast between Timbuktu and Europe. The traded goods mostly consisted of ostrich feathers, gold dust, salt, ivory, slaves, etc.

Under the reign of Sultan Moulay Yazid, the Jewish community was relatively spared from persecution and settled in a new Jewish quarter from 1807. Unlike the former Mellah or Jewish quarter, the new one was located inside the medina in order to protect the Jews from possible abuses and helps maintain a high level of culture and education.
In the 19th century, the city started its decline, but it remained a major economic and military center. Following the French invasion after 1844 and sacked the city by surrounding tribes, the Jews had to leave Essaouira to settle in Marrakech. However, they eventually returned later during difficult economic conditions.

When the Spanish attacked in 1860, the Jews took refuge again in the province of Haza and their plight drew the attention of Sir Moses Montefiore, who obtained the grant of new land to build a second Mellah. At that time, a strong community organization could meet the needs of a population from 4,000 to up to 14,000 people. While the Jewish quarter was represented by a Sheikh in the political and civil affairs, its religious status was supported by a court of three rabbis.

The expenses of the community came from taxes on kosher meat, on imported products, and from various donations from international sources. Many religious schools, a yeshiva, and several English-French

Jewish schools were founded in Essaouira in the 1800s. In the early 20th century, the Jewish population in Essaouira was still higher than the Muslim population, and urban life was regulated by the Jewish calendar. While in 1901 the Jewish community counted 19,000 people, the number went down to 5,000 at the beginning of the French Protectorate and continued to decline during the 1950s and 1960s.

Among the figures that shaped the history of the Jewish community of Essaouira, we could mention Rabbi Abraham Coriat, Abraham Ibn Attar MessodKnafo, Rabbi Haim Pinto and the Corcos family. Today, there are few Jewish families living in Essaouira, and the Community Council has undertaken to restore the Attias and Pinto synagogues. Led by Andre Azoulay, an adviser to the king, the city is experiencing a renaissance and is one of Morocco’s main destinations for cultural tourism.

The best way to visit Essaouira is from one of Morocco’s major cities, well-connected by land and air. Essaouira is a favorite destination on a day trip from Marrakech since it can be visited in one day and it is just a couple hours’ drive from the Ochre City.