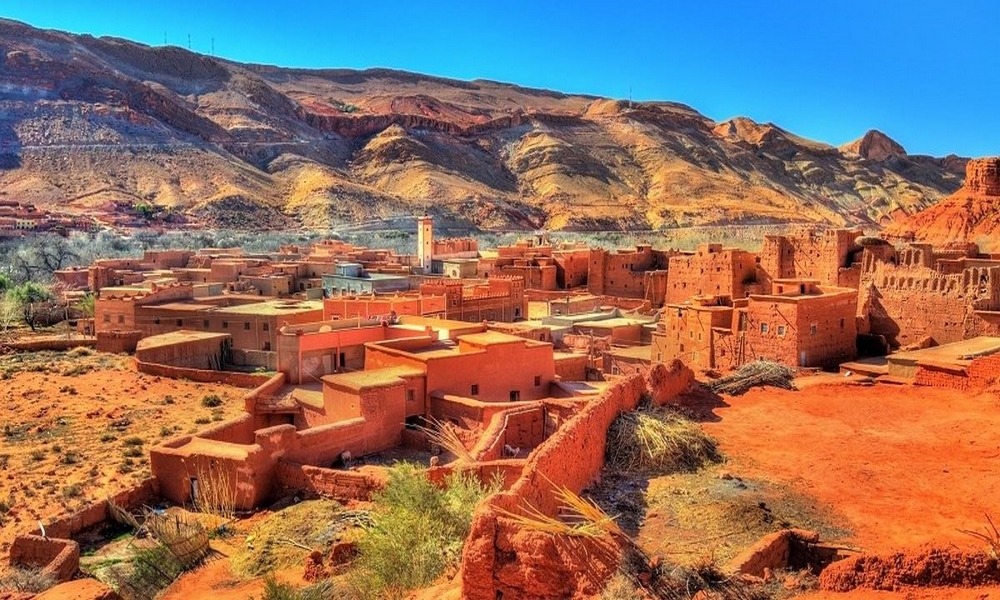 Kasbah Aït Benhaddou
Aït Ben Haddou is a ksar, a fortified village located at the bottom of a mountain of the High Atlas, in the province of Ouarzazate. Its traditional dwellings and distinctive architecture contribute to its listing as a World Heritage Site by UNESCO.

The traditional dwellings found in Aït Ben Haddou are constructed of pisé (rammed earth), an ancient building method that provided excellent protection from the cold and heat. These dwellings are located inside high defensive walls, with angled towers and are an impressive and memorable sight. The village has few inhabitants and appears to be literally frozen in time. You will see earth ovens for baking fragrant breads, an ancient attic or a rustic cowshed. You can visit some of these historically significant homes that retain a feeling of warmth and have been meticulously maintained and walk through the entire village as you experience a lifestyle from a slower less hectic time.

This ksar is a regrouping of houses around the Kasbah of Aït Ben Haddou and was surrounded by walls in order to form a fortress. The ksar was built by nomads who desired a sedentary and peaceful way of life. According to known historic documents, its building dates from the 11th century. Some architectural links can be found with other fortresses built by Almoravides during the same time in the Road of the Caravans, which confirms this. On-site, you’ll discover its fascinating history, narrated by a local guide.

This area is beautiful to view when the sun sets or rises and you will be charmed by its desolate impressive beauty and timeless atmosphere. The entire setting is so picturesque that you will almost feel that you are on the set of an exotic movie rather than visiting a real village. Parts of the great movie Lawrence of Arabia were shot here and other movies have chosen this mesmerizing locale to portray a simpler and more beautiful place and time.

Draa Valley
The magical Draa Valley that originated in the small village of Agd is a winding wonder of palmeraies, ochre kasbahs, orchards, and stunning Berber Villages. The road from Ouarzazate in the desert through the Draa Valley is the most beautiful in all of Morocco. The water of the streams of Ouarzazate and Dades merge and the Oued Draa, the longest river in Morocco, flows underground and resurfaces in the open air 60 kilometers away. From lush foliage to almost desert canyons the breathtaking landscape is rich and varied and one of the startling contrasts.

The Draa Valley is an oasis that stretches majestically over 200 km. The road running parallel to Zagora is lined with palm trees and abundant and varied crops: figs, apricots, small fields of grain, wheat, henna, and mint are grown in small plots irrigated by the Draa River.

The kasbah, large buildings to protect the adobe homes from extremes of heat and cold, is surrounded by adjoining houses, forming a village called Ksour. The Ksour Valley features traditional living units made of earth and straw for insulation that are situated high above the fertile soil to conserve precious agricultural land. At night, families and friends gather to spend the evening in a friendly and inviting atmosphere. Among the fifty Kasbah of the valley, do not miss Tamnougalt, the most prominent of the valley.

This vital axis linking the desert with the big cities of Morocco has long been a famous and well-traveled passage. Communal granaries and fortified guard towers along the way remind us that the country was the center of tribal wars that did not stop until recently. The valley is a historical location known as a large and significant trade route and as a passage for caravans coming from the desert.

The Draa crosses through Zagora and continues until M’hamid. There, it disappears into the sands of the desert. The longest river in Morocco, Oued Draa, originates in the High Atlas before reaching the Atlantic just north of Tan-Tan a town 25 km from the beaches of the Atlantic Ocean, 380 km south of Agadir.

Erg Chebbi Dunes
The city of Merzouga leads you directly to the Chebbi erg, 50 km from the Algerian border. The Chebbi erg is a beautiful and unforgettable group of orange ochre dunes. (An erg appears in a basin when the wadis transport fragments, which then form a grouping, and only the top of the dunes is modified by the wind.) Dunes and the sun magically intertwine in Chebbi erg, and the play of lights and shadows is one of the most gorgeous sights of the entire Sahara.

The enchanting display of colors and the magical atmosphere particularly at sunset is extraordinary. You may travel through the dunes by camel from Mergouza where guides are ready to lead you on a trek of several hours’. You may also choose to camp in the dunes with the nomads, under the arresting beauty of the starry desert sky.

The Chebbi erg is 27 km long and 7 km wide. It is a true marvel of nature, with dunes that appear to spring from the ground and become monuments made of sand. From its majestic and ephemeral crests that are constantly impacted by the wind, the Sahara appears to be covered with a veil of mystery and unsurpassable grandeur. From whichever slope you stand upon, the imposing pillars of one of the desert plateaus mark the horizon.

Those who love vast expanses and the beauty of silence will be delighted with the majesty of the hypnotizing dunes. They are an ideal location for meditation and contemplation. If you are planning to go there during the summer, beware of the temperatures that can easily climb up to 50°C in July and August.